This is the second in a series of four articles covering the themes behind many of Google’s recent local search feature releases and interface updates. In the first installment, I discussed Google’s increasingly personalized or customized search results, marked by content pulled from GMB profiles, the business website, and Google users, and matched to specific queries so that each SERP is unique. In this second installment, I’ll be talking too about interfaces that differ according to what you’re searching for, but in this case the differences are verticalized.
The post Google Local Search Trends II: Verticalization first appeared on Street Fight. 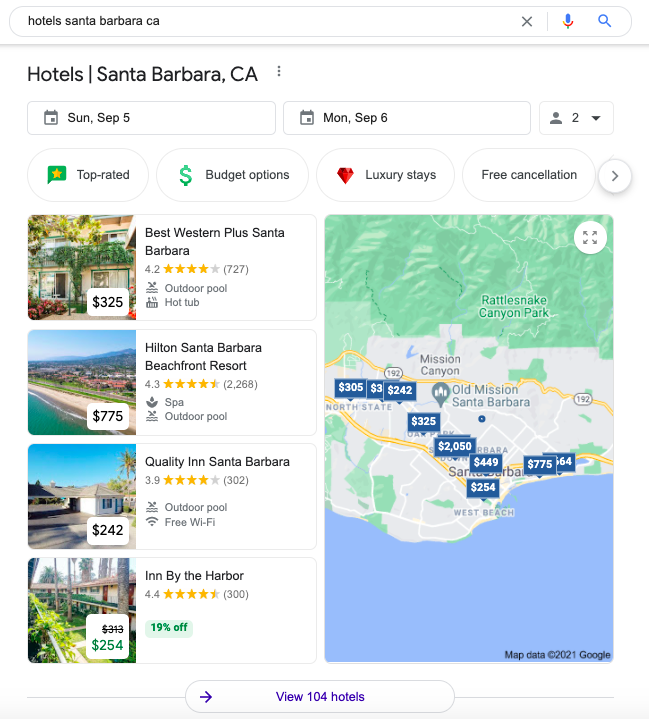 This is the second in a series of four articles covering the themes behind many of Google’s recent local search feature releases and interface updates. In the first installment, I discussed Google’s increasingly personalized or customized search results, marked by content pulled from GMB profiles, the business website, and Google users, and matched to specific queries so that each SERP is unique. In this second installment, I’ll be talking too about interfaces that differ according to what you’re searching for, but in this case the differences are verticalized.

The trends of personalization and verticalization are closely connected. With personalization, Google is catering to the needs of users seeking very specific types of information about business offerings by customizing individual search results. With verticalization, Google is bucketing user needs for certain kinds of businesses and creating customized interfaces, destination sites, and conversion paths for each. Some of the differences between verticals are dramatic, some more subtle. Some have been around for a while (though still evolving) and some, especially the less traditional groupings, are fairly new.

The four traditional verticals Google has redefined as being the most obviously distinct from generic local search are hotels, retail, restaurants, and services. For each of these verticals, Google has created a search interface that differs significantly from that of the generic local pack/local finder. The Google Maps app, though more uniform in its presentation, also includes differentiating features for each of these verticals. Notably, with three of the four verticals especially — hotels, retail, and services — Google has also blurred the line much more aggressively than in generic search between paid and organic content. Google no doubt chose to focus extra attention on these particular verticals not just because they intrinsically called out for separate treatment but because they could be monetized more easily.

The Google Hotels interface, which is linked to Google Travel rather than the local pack / local finder, is one of the more dramatically differentiated examples. Searching for hotels on a desktop browser today, users will see a “hotel pack” result that looks something like a local pack on steroids, with special filters, room prices, and callouts with custom icons for amenities like “Outdoor pool” and “Free Wi-Fi.” The pricing comes from the hotels themselves as well as a host of online travel agencies (OTAs) like Expedia and Hotels.com, who bid for placement alongside the hotel. Clicking on any result in the hotel pack takes you to a massive, detailed hotel profile with multiple tabs of information including Google-sourced and third-party reviews and photos, nearby attractions, and a long list of finely detailed amenities, with recent additions including health and safety information (far more detailed than any other vertical) as well as sustainability practices and eco certifications.

If hotels are the most distinctive example of a highly differentiated traditional vertical, retail and services come in at a close second. For retail, Google is melding the Google Shopping experience with local search more and more as time goes on, with local filters available in the Shopping interface and product listings appearing in local profiles, whether from Local Inventory Ads or the SMB equivalent See What’s in Store — the latter powered by Pointy, a startup Google acquired last year. Google is bent on acquiring as much product data from retailers as possible, going so far as to make it free across the globe in 2020 for merchants to upload inventory feeds in the Merchant Center. Paid product listings appear more prominently and in more places, but organic product listings are growing and filling in the gaps where Google doesn’t have paid inventory to display.

As for services, Google’s Local Services Ads program, supporting a growing list of verticals including attorneys, real estate agents, cleaning services, repair services, construction, garage door installation, HVAC, and many more, also makes use of a dedicated interface that looks and behaves differently from both generic search and other vertical destinations.

Google in these instances is aiming to win market share away from incumbent platforms — the OTAs in the case of travel, Amazon for retail, and HomeAdvisor-type sites for services — and keep more traffic within its own walls. For all of their bells and whistles, these verticalized interfaces are optimized for a unitary goal: conversions (room bookings, product sales, service bookings). All of this is also true for restaurants, though restaurants are the least differentiated of the four traditional verticals.

In many ways, restaurant results look like any other listing, with a few differentiating features such as special filters for ratings, cuisine, price, and hours. The real growth area for restaurant verticalization has been with takeout and delivery, increasingly housed within Google’s own platform (like Pointy, the result of an acquisition). Just recently, Google moved all food ordering buttons, including third party and restaurant-managed options that used to be displayed separately, into a unified Order with Google interface that interacts via APIs with providers like DoorDash and Uber Eats. The entire transaction takes place in Google’s ordering platform.

Non-Traditional Verticals Are Growing Even Faster

I’ve been following and writing about this verticalization trend for a while now, and my earlier predictions were that Google would do more with the verticals they’d already separated out from generic search, and that they’d branch out into additional verticals such as auto dealers. The first prediction has been borne out — and the second has, too, though not in the way I’d have thought.

Instead of finding new traditional verticals around which to create customized experiences, Google has looked increasingly at non-traditional groupings of businesses that share common characteristics. I’ve already mentioned Order with Google as a deepening of the restaurant search experience, but Order with Google is also available today for grocery stores and convenience stores, and may soon be expanded to include any number of business categories where items might be ordered ahead for pickup or delivery. This approach seems to represent a shift in Google’s thinking about differentiated experiences, away from traditional verticals and toward more ad hoc groupings that cut across those categories and encompass a broader variety of business types.

Appointment booking stands alongside ordering as a prominent example of this trend. Appointments apply to a wide range of business types involving service professionals, from salons to insurance agents to financial planners and attorneys. Appointments even have applicability for retail — we saw a rise during Covid of interest from retail clients in creating opportunities for shoppers to book special shopping sessions before or after regular hours. Though the appointment booking customer experience on Google is more fragmented today than with ordering, the trend seems to point, as we’ve been hearing with all earlier examples, toward a Google-driven experience under the Reserve with Google banner.

Reserve with Google provides an end-to-end booking experience enabled by partners who integrate Google’s Booking API, and covers the following industries (with all implied subcategories): beauty, dining, fitness, financial services, local services, and shopping. Merchants have to pay to participate in the end-to-end version, but it’s also possible within some categories to enable reservations powered by Google Assistant, which makes use of Google’s Duplex voice AI to call the business and arrange a booking on behalf of the customer.

Non-traditional groupings are not exclusively about methods of conversion, however. More and more, Google is calling out differentiating attributes shared by businesses of all kinds that may be important to consumers looking for a local shop or service that aligns with their ethical concerns and values. The introduction of identity attributes such as “Black-owned,” “women-led,” “veteran-led,” and “LGBTQ friendly” are part of this trend.

Google is also emphasizing eco-friendliness in various ways, most recently by launching on Earth Day 2021 a set of recycling attributes (adoption of which the company is actively promoting) that show consumers which stores offer kiosks or drop-off stations for the recycling of various kinds of materials, from used clothing to plastic bags to batteries and electronics. In its promotional materials for the new feature, Google notes that they’ve seen a 150% increase in recycling-related queries over the last five years and that more than half of consumers agree that sustainable business practices are important to brand loyalty.

As I said in the article on personalization, the verticalization trend represents a host of opportunities to optimize listings out in front of the competition. The trend also invites businesses to be creative about how they define themselves and how they can best meet the expectations of modern consumers.

It may never have occurred to many brand marketers, for instance, to promote the availability of recycling kiosks at store locations, or to think of “where to recycle batteries near me” as a source of valuable search traffic. But Google is catering to the needs of consumers for customized experiences across traditional and non-traditional verticals for one reason and one reason only: because consumers are showing signs that they want and need this information and that they will be more likely to do business with the merchants that provide it.

Like it or not, the world of verticalized search experiences increasingly belongs to Google, and merchants must play by Google’s rules to participate — but this is far better news for merchants, whom Google will always rely on as the last arm of fulfillment, than it is for the vertical incumbents Google is increasingly pushing to replace.

For faster login or register use your social account.